We have been completely overwhelmed with everyone’s  enthusiastic response to the announcement and release of AlphaTricks this month! As we’ve worked with users, we’ve uncovered some common questions, as well as tips that it seems everyone would like to know about:

Embrilliance software is all about customizing and creating unique designs easily – AlphaTricks is no exception! 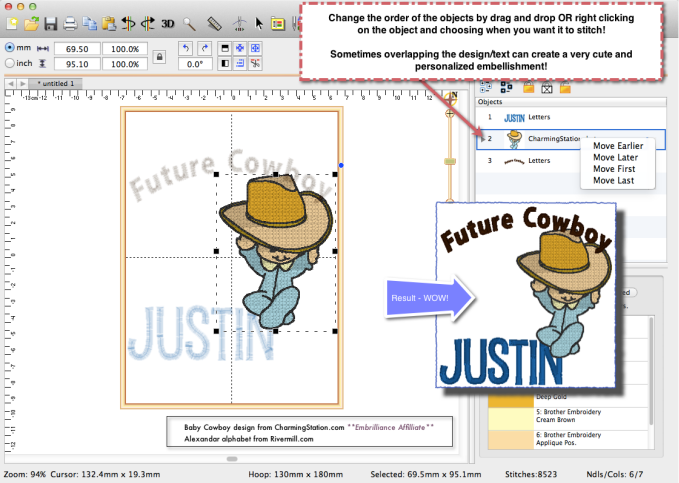 When you combine lettering with designs, the intention is usually to create something personal. This baby cowboy design from one of our affilliates Charming Station, http://www.CharmingStation.com, is transformed into a special embellishment by adding the name and “future cowboy” arched above. We could have easily just centered each object – two lettering objects and the design object – with space between them and it would have been lovely. But by off centering the design – and placing it on top of the letter N as if he were really sitting there, and overlapping the arched text on the hat, it looks like this was the original interpretation of the design.

The object pane on the right hand side allows you to change the stitching order with a simple right click on the object and choosing a new location or by dragging and dropping the objects to new locations.

If your folder that contains your alphabet designs only contains one size, the easiest way to map them is to use the Select All button and then Import button right next to it. 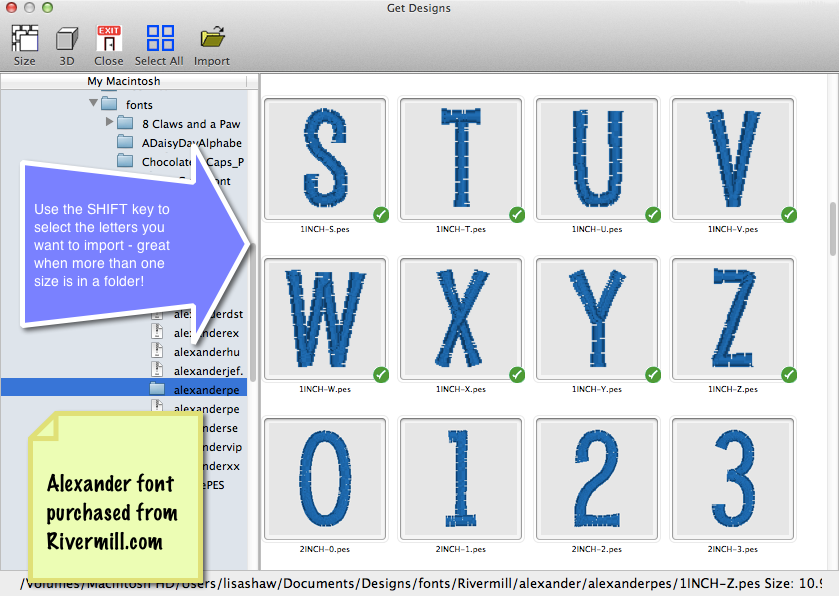 If your folder contains more than one size, you can use the SHIFT key and/or the Control/Command key to select only the files that you want to import. A green check mark displays on the selected designs so you know what will be brought into the mapping dialog when you click on the Import.

Remember that you can always add or delete individual letters from the mapping dialog.

Some alphabets will also include non-alphanumeric characters like #, &, @ and of course punctuation!  Because these characters reside on the keyboard, you can assign keyboard strokes to match.  However, there is no logical automatic mapping like A-Z, so they are not included in any of the shortcut buttons.  These characters would need to be assigned manually which is very simple to do.

TIME SAVING TRICK!!  Sometimes a designer will spell the character as the file name – for example ampersand.PES or period.PES or comma.PES.  If you imported all the characters at one time, they are shown alphabetically which would put the ampersand.PES after the “small a” which is named aa.PES.  If you were to click on the “A” and select the Aa-Zz button to map the alphabet, it would actually assign the keystroke of SHIFT+B, capital B, to the ampersand because it follows the pattern you have told it to expect.

During our research into making this the easiest to use alphabet mapping program on the market, we developed a feature to save you time during this mapping process when you have punctuation.

Map your punctuation manually first.  Click on each punctuation and type in the keystroke to assign it.

Now go back to the first letter that you haven’t assigned – that would be the capital A in this case – and select the Aa-Zz key.  The mapping algorithm will skip those characters that you have already assigned keystrokes to and just map those that have not been assigned yet!

So if your alphabet has punctuation, map those characters manually first, then use the shortcut mapping buttons to take care of the rest!

The most common questions YOU are asking!

Q: How do you install and authorize AlphaTricks?

A: This was such a popular question we created a new video showing you exactly how!

YES… you can add the Essentials Fonts 1 Collection to AlphaTricks to get these object based decorative lettering – may be added to EITHER Essentials or AlphaTricks stand alone.

YES… if you decide you want to add Essentials or Fonts 1 at a later date it can be done at any time!

"The program is wonderful. It is so nice to see the thumbnails in realistic view! Thanks again"
From Nana
Regarding Thumbnailer